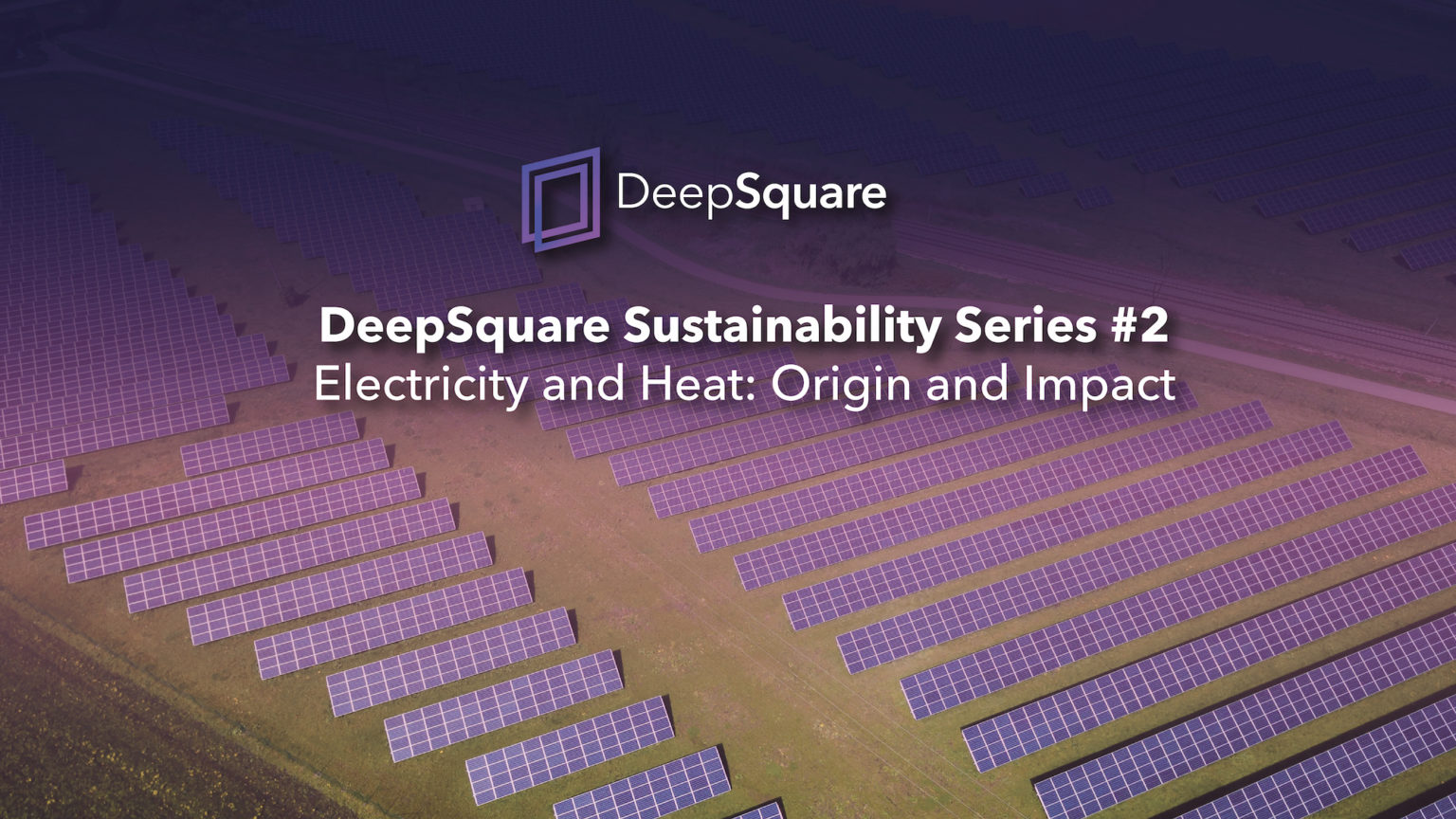 Electricity and Heat: Origin and Impact

Although sustainability encompasses a much broader set of themes and challenges than electricity consumption, we established in our previous article that the environmental impacts of data centres are largely related to the origin (electricity production mix) and quantity of electricity used (efficiency) to power infrastructures and deliver services. Electricity consumption therefore plays a crucial role in the sustainability of HPC operations, directly related to the greenhouse gas (GHG) emissions emitted per unit of computing power delivered. The purpose of this article is twofold: first, to highlight and discuss the relationship between electricity and GHG emissions and second, to outline how DeepSquare is addressing this issue, specifically in the context of the impending energy crisis that Switzerland and European countries are facing. To delve deeper into these topics, let’s start with the basics and some background data.

Energy comes in many forms and can be understood as either primary or final energy. Primary energy consists of all energy carriers that are directly present in nature and have not been subjected to any human engineering processes. We can think of primary energy as a natural stock or potential of energy available to meet human and non-human needs. Among the primary energy carriers, we can further distinguish between fossil fuels (e.g. oil, coal, gas) and non-fossil fuels (e.g. nuclear, solar radiation, wind, biomass, hydraulic). Finally, with the exception of nuclear fuels, all non-fossil fuels can be considered renewable.

Final energy refers to all energy carriers delivered in a form ready to be used by the end user (electricity, thermal energy, fuel for cars, etc.). The point is that industrial systems and processes are constantly transforming primary energy found in nature, first into final energy through power plants and oil refineries for example, and then into lower grade energy, namely heat, through the many processes required to produce goods and services. This universal physical law is called thermodynamics (entropy). We now know that the valuable electricity we use to power data centres can be generated from many different primary energy sources, ranging from highly carbon-intensive forms of energy (e.g., coal), to carbon-neutral (e.g., biomass), and carbon-free (e.g., solar, wind and hydraulic). But, how exactly are electricity and GHG emissions related?

Different energy carriers and their relation to CO2

Thermal power plants convert primary energy fuels (oil, coal, gas, etc.) into final energy (electricity and heat). If we want to summarise the process, it would look like this:

Therefore, each unit of electricity contains at least as much carbon as the amount embedded in the primary energy used to produce it. On the other hand, renewable power plants convert carbon-free (wind, solar, hydro) or carbon-neutral (biogas, wood) primary energy sources into final energy, namely electricity and heat. This electricity is carbon-free since wind, solar and hydroelectric flows are not included in the CO2 cycles. However, biogas and biomass (e.g. wood chips, pellets) are also used in thermal power plants. These fuels are considered “carbon neutral” because they are included into CO2 cycles but the photosynthesis occuring during biomass growth captures as much CO2 from the atmosphere as the fuels emit during their combustion. Since all European countries, including Switzerland, rely on very large and sophisticated grids to cover their electricity needs, which are in turn supplied by a wide range of power plants using different primary energies, we use the concept of electricity mix to characterise the composition and amount of GHG embedded into the electricity consumed in a given area (usually a specific country).

As noted above, whenever an industrial process consumes a given amount of electricity to produce a good or a service, that same amount of electricity is irreversibly converted to heat thanks to thermodynamics physical laws. Heat is also a valuable final energy carrier and a resource that can be produced from many different sources. The main challenges when it comes to heat production are related to efficiency – using as little primary energy as possible to produce a given amount of heat – and decarbonization – using as little fossil fuels as possible to produce heat. While the efficiency challenge is well underway thanks to numerous incentives and regulatory measures, household heating is still consuming 20% of final energy in Switzerland, 66% of which is produced from fossil fuels (heating oil, gas). This situation leads to a direct consequence on Swiss GHG emissions patterns: household heating still represents 19 % of national CO2 emissions in 2022.

As a Swiss native project we are actively monitoring the situation primarily in Switzerland and the rest of Europe, understanding current electricity and gas supply challenges. Switzerland is currently facing the severe risk of an electricity shortage.

Add to this that more than 60% of Switzerland’s domestic and commercial heating is produced from imported oil or natural gas. Obtaining enough fuel to heat households could also pose a serious problem leading to a “colder” winter than usual. All of Switzerland’s domestic gas is imported from European countries and almost half of European imports (45%) come from Russia. Due to the sanctions against Russian gas, most of the gas imported from Europe by Switzerland will not be available this winter. This double challenge is the result of past and long term technico-economic choices combined with the current geopolitical instability. It is clear that the current situation must be considered as an opportunity to definitively move away from our dependence on fossil fuels, whether for the production of electricity or domestic heat.

Sustainability is at the core of DeepSquare, and we are not ready to make a tradeoff between our environmental impact, the economic efficiency of our operation and the technological quality of the services we deliver. So, we decided to take up the challenge by defining and implementing a strategy based on four main concepts to develop the first sustainable and decentralised HPC infrastructure in Switzerland.

The Concept of Efficiency

The concept of (environmental) efficiency refers to reducing energy requirements by producing as much output (goods, services) as possible with a given amount of input (e.g. electricity). In our specific case, this means using less energy than our counterparts while providing at least the same amount of cutting edge computing services, if not more. While electricity is the key input to power our clusters, we decided to find another way to cool our equipment and save energy in this area by opting for immersion cooling technology. Immersion cooling requires far less electricity for the cooling processes than for an equivalent amount of service produced in an air-cooled data centre. To put this in perspective, a traditional air-cooled data centre consumes an average of 0.57 MWh for cooling for every MWh used to generate computing power, whereas DeepSquare’s immersion cooling technology consumes only 0.02 MWh (25 times more efficient). In addition, immersion cooling technology has a second major efficiency benefit: while the process-induced heat from air-cooled data centres is usually released to the environment as “waste,” immersion cooling recovers up to 94% of this energy as a valuable “co-product” of the process.

The Concept of Circular Economy: “by-products” and “co-products”

By definition, a by-product is a product that is produced incidental to the production process of other products and has a negative value. Conversely, a co-product is a valuable product generated during the production process of another product or service that has a positive value. In the case of DeepSquare, the co-product is the heat induced by the computing operations. This means that DeepSquare is recovering and eventually selling the heat, generating revenue on something that air-cooled data centres generate costs on. This circular economy model is already applied in two of our clusters in Switzerland. Thanks to this specific configuration, DeepSquare is leveraging a widely developed and common infrastructure in Switzerland (thermal networks) to simultaneously provide two services out of the same amount of electricity: 1) High Performance Computing capacities to private and public institutions and; 2) domestic heating to Swiss households and commercial buildings.

The Concept of Substitution

The concept of substitution arises from the two previous concepts of efficiency and co-product: because DeepSquare is able to efficiently recover its co-product (i.e. heat), it can then use it to replace heat produced from other carbon-intensive forms of energy (fossil fuels) which are still paramount for heat production in Switzerland (see above). Thus, for each unit of heat transferred to district heating by DeepSquare, a corresponding amount of heat was not produced from fossil fuels and the corresponding GHGs were not emitted to the atmosphere. The exact amount of GHG reduction can then be calculated based on the difference between the GHGs emitted to produce the electricity consumed by DeepSquare – generating heat – and the GHGs that would have been emitted to produce the same amount of heat from fossil fuels. This difference is called a carbon offset and tends toward 100% when renewable electricity is used to power DeepSquare’s infrastructures.

The Concept of Decentralisation

Finally, the last concept, decentralisation, is pivotal to implement and articulate the previous three concepts. The benefits of decentralisation are twofold. First, renewable electricity production and supply, especially solar and wind, are intermittent and rely on decentralised power plants. This requires flexible implementation in terms of electricity supply and load balancing of power grids. Secondly, it is essential to place energy-intensive HPC infrastructures in strategic locations to meet proximity needs of computing power consumption – edge computing – but also to ensure optimal heat reuse and maximum carbon offset. Indeed, heat needs are unevenly distributed over the territories and are usually concentrated in urban areas, precisely where computational needs are also paramount (e.g. banks, administrations, public and private research facilities, etc.). Moreover, not all district heating networks (thermal networks) are suitable to be efficiently complemented by DeepSquare’s co-product since we only offer medium temperature heat. Therefore, decentralisation of our infrastructure is a key concept to identify optimal locations based on sustainability principles.

This article is part of our Sustainability series aiming to delve deeper into the complexity of sustainability. In the previous article we offered a high level explanation of sustainability, and upcoming articles will discuss PUE, Idle resources, decentralisation and CO2 emissions.

Your e-mail
Your data is safe!